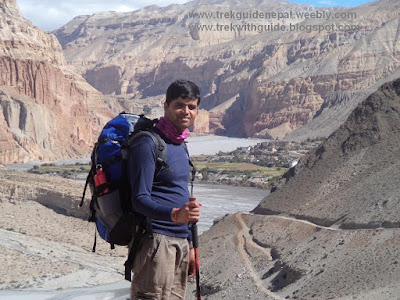 Upper mustang trekking in Nepal Mustang is an ancient  Himalayan Kingdom which lies in the northern central part of Nepal and at the  top of the Kaligandaki River. Upper Mustang consists of two distinct regions:  the southern part and the northern where the languages, culture and traditions  are alike to those of the Tibetan people. This area is consider as one of the  most interesting and picturesque places in Nepal. The whole area has an isolated  and mystical feel to it, enchanting and inspiring visitors to this  region.

The trek to Lo- Manthang is through high altitude desert country  climbing in and out of the huge sided valley of the Kali Gandaki. In places the  gorgewhich the Kali Gandaki River runs through is the deepest in the world.   This region is full of some of Nepal’s oldest Buddhist Monasteries, ancient and   isolated villages with quaint white washed houses.

(Please Note: If the Below schedule does not meet your need and interest, I can design individualized travel plans based on your preferences.)
Day 1: Kagbeni – Chele: 7 hours 2800 m - 3050 m 18 km.
Today we climbs quite steeply up into a jumble gullies and small towers, zigzagging to a viewpoint over Kagbeni with Nilgiri providing a dazzling white fluted back drop from the Kagbeni checkpost. The trail keeps to the east bank of Kali Gandaki River, climbing and descending. We lunch at Tange village the first village from Kagbeni to meet about 4 hours walk. It is also the Mongolian village where the all villagers are mixture of Gurung, Thakali and some families from the land of Lo. From Tanbe the trail again climbs to a high point around 3100 m. The trail then drops steeply and undulates along the east bank of Kali Gandaki for 1 ½ hours to the village of Chhuksang, from Chhuksang we can see the Chele. After a short walk along the river bank, there is a solid bridge across the Kali Gandaki at the point where it tunnels. Its way under a vast block of red sandstone, from here it is a short sharp climb to Chele 3 hours walk after lunch.

Day 2: Chele – Eklobhatte 6 hours 3050m - 3820 m.
The path climbs steeply up to a plateau region through a small tunnel like gully, climbing more. Gradually, the village of Ghyakar appears to the west as the path rounds a corner. The view South offers a panorama of Nilgiri, Tilicho peak and Yakawa Kang. The peak that dominates the Thorongla Pass on the Annapurna circuit. To the far-east the range of the Damodar Danda show peaks is visible. From the pass it is a short descent to Samar, a pleasant settlement in a grove of willows with good running water in irrigation channels. We get Samar village after 3 hours from Chele . It is the lunch place. After leaving Samar the trails dives steeply for about 70 m into a deep side canyon. Inevitably it is a short steep climb out and after a brief respite it dives again into another side canyon. This second climb is steeper and longer. After about 2 hours walk from Samar, the trail reaches 3750 m and descends slightly to the first tea house. The second tea houses can be seen in the distance, but once more the trails dives into another steep canyon and it will take a further hour to reach it. This place is known as EkloBhatte. This is our camping place.

Day 3: Eklo Bhatte – Ghami 6 hours 3520m.
From camp the trail climbs gently to a small pass at 3870m with views directly below into deep eroded canyons; which is one of the beautiful cave monasteries. About 1 1/4 hours from camp, is the tea shop of Syangmochen, another possible camp area. After gentle climb levels out to a Chorten (3700m. 2 hours) and the first view of Geling villages below (3500m). From here the path descends gradually into another less severe qully and climbs out to a collection of houses for lunch after 2 1/2 hours. Geling would be a good camping spot, with a monastery, Chorten and fairly extensive flat fields. From the lunch spot the trail continues round above Geling and starts the long climb to the Nyi pass at 3950m. A long descent, out of the wind, takes us down more steeply to Ghami 3520m. 11/2 hours from lunch.

Day 4: Ghami – Tsarang 6 hours 3520 m3500m 11 km.
From the Gompa in Ghami two tracks level down into a gully east of the village, one steeply past a trio of red, black and white Chortens that are a common sight in upper Mustang. At the bottom of the qully are two bridges across the river, there is a direct path to this point not visiting Ghami. The trail climbs onto a gently sloping plateau and passes beside a very long mani wall, about 1/2 hour, from Ghami , from the end of the wall, the trail heads east away from a very dramatic red eroded canyon wall towering above the village of Tramar in the distance, climbing steadily an altitude of 3770m is reached after about 2 hours from Ghami. The descent to Tsarang is mostly gentle and completed in a further 2 hours.

Day 5: Tsarang – Lo-Manthang 5 hours 3500 m - 3700m. 13 km.
The trail leaves Tsarang to the northwest and once clears of the village drops steeply into the Tsarang Chu canyon. After crossing the river, the route is initially very steep up a stony trach. As we round the corner and heads north , a fine view of the great white Himalayan peaks of Nilgiri, Tilicho and Annapurna I behind Brikuti peak is visible to the south east, the trail climbs gently along the west side of a side valley to an isolated chorten at 3620 m. 2 hours from Tsarang. A further hour takes us to 3700 m with some spectacular caves high up in the cliffs to the east. Having climbed to around 3850 m. a pass is reached and through a narrow ‘window ‘at the Summit the view ahead opens out to display the western valley of Lo-Manthang. The bright red and grey monastery of Namgyal sits on top of a pro monastery, with the wide valley surrounding Tingkar (the site of the King’s Summer palace) and Phewa villages behind Just down from the pass is the first dramatic view of the walled city of Lo-Manthang and the ancient ruined forts on the chills behind. There is a tremendous view to the east of the red, blue, grey, white and yellow eroded Mustang Khola canyon, to the north lie the flattish red colored hills and the Tibetan border. The western view is dominated by the snow-capped peak of ‘Manaslu‘. The descent to Lo-Manthang is short and after crossing the small river and climbing briefly the fabled city is finally reached.

Day 8: Lomanthang and western valley, Namgyal, Tingkar 4 - 5 hours, round trip.
It takes around 2 hours to reach Namgyal Gompa which is situated at the hilltop serves as an important monastery of the local community and as local court. After visiting Namgyal gompa continues the tour to Tingkar, which is the village of around 400 houses, the laste main village to the north-west of Lo-Manthang.

Day 9: Lo-Manthang – Surkhang (3670m) / Yara Gang (Village) 4-5 hours.
From Lo-Manthang, the trail walks straight till Dhi pass (4100m) and descend down to Dhi village. Dhi village is one of the best village of Lo-Manthang regions. It seems more prospectuses and it is settled in a very suitable place. From then, the trail goes through river around 2 hours then reaches Surkhang.

Day 11: Surkhang – Tange Height - 3500 - 3240 m Time - 4 hours Distance - 10 km.
From Surkhang, we need to cross a river from Damodar Kunda one the sacred lake. There is no bridge on the Ghechang River, so we need to walk across the river in bare feet to cross this river. After crossing the river, the trail climbs up till high above a pass of 3850m, the trails goes through grasslands, treeless bare hill. After the pass the trail drops directly to Tange village at an elevation of 3240m. Tange is small village with around 30 houses but most of the houses are attached each other. On the roofs, one can see the piles of dry woods, which also reflect the prosperity in their society.

Day 12: Tange – Tetang Height - 3240 - 2940 m Time - 30 hours Distance - 10 km.
The trail walk through the deep ridge of hill providing the fine views of wind carved hills. Tetang village is formed between 2 hills as they should have found it as a safe place to avoid strong wind that hit the entire Kail Gandaki valley. Tetang is the upper village of Chuksang.

Day 13: Tetang –Kagbeni
Day 14: take the jeep to jomsom and again next transport to Tatopani(hotspring) or flight to pokhara
Day 15: From tatopani to pokhara by bus.