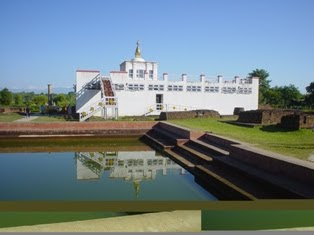 Lumbini sightseeing
This is the sacred site of Lord Buddha's birth, which is today a small village in Nepal, 27 Km from Sunauli on the Indo-Nepal border. The sacred site of the Buddha's birth is at the southern end of Lumbini grove. Excavations have revealed a series of rooms and a stone slab, which is now believed to mark the exact location at which the Buddha, (or Siddhartha as he would have been known then) was born. The whole place has an air of remoteness except when the occasional busload of pilgrims from different corners of the Buddhist universe arrives.

The Rummendei pillarThree hundred years after the Mahaparinirvana, Emperor Ashoka visited Lumbini and erected a pillar there. This pillar, though broken, still remains at the site. It is known as the Rummendei pillar after the earlier name of the place (modern name Rupandehi) in Nepal.

The Mayadevi templeThe Mayadevi temple and the tank nearby are part of the sacred complex. There are two beautiful panels in the temple, the older one in stone and the other in marble. Both panels show Mayadevi holding the Sal tree and the young prince emerging out of her right side. Just outside the temple is a tank whose water glistens in the faint sun, the gentle breeze creating endless ripples. Here Queen Mahamaya had her bath before the delivery and it was also here that Prince Siddhartha had his first purification bath.

Dharmaswami Maharaja Buddha ViharaThis Tibetan gompa belonging to the Sakyapa order, is also outside the complex. His Eminence Chogya the complex. His Eminence Chogya Trichen Rinpoche and the Raja of Mustang established it. Every morning around sixty monks who reside here conduct the Tara Puja. At the end of September, two thousand monks congregate for a 10-day Puja and on 13th December each year for the Mahakala Puja, which also lasts for 10 days.

A couple of kilometres away, a complex of monasteries is constructed on a grand scale. Monasteries in the respective national styles of Myanmar (Burma) China, Japan, Korea, Vietnam and Thailand are among those that are built. Also in the vicinity are the Lumbini Research Institute, which has an impressive collection of Buddhist literature, and a Museum. Both are open from Sunday to Saturday, 10 am to 5 pm (10 am to 4 pm in winter)

KapilvastuLocated some 27 km west of Lumbini lies the ruins of historic town of Kapilvastu. Also, the place is believed to have been associated with different important episodes: there are ruins and mounds of old stupas and monasteries made of kiln-fired bricks and clay mortar. The remains are surrounded by a moat and the walls of the city are made of bricks. In fact, the city of Kapilvastu is constructed on such a grand scale that it is not hard to picture it as a seat of high culture.

AroarakotAbout 10 km northwest of Taulihawa there is a rectangular fortified area, which is popularly known as Arourakot. The fortified area was identified by the famous Indian archaeologist P.C. Mukharji as the natal town of Kanakmuni Buddha (one of the forms of Buddha). Remains of an ancient moat and brick fortification around the Arourakot is still clearly visible. A brick lined well is seen to the south and an elevated mound towards the northwest corner.

KudanAbout 2 km. southwest of Taulihawa, on the left side of the Shoratgarh Taulihawa road stands the village Kudan that boasts a huge structural ruin with a cluster of four mounds and a water body. The mounds were excavated in 1962.

NiglihawaAbout 8 km, northwest of Taulihawa, there is another site of archaeological importance. The site has quadrangular water body surrounded by bushes, locally known as Niglisagar. On the western Bank of the tank there are two broken pieces of the Ashokan pillar, the longer one laying flat and the shorter ones stack into the ground. The pillar bears two peacocks on the top part and a Devanagari script inscription reading Om Mani Padme Hum (praise to the jewel at the heart of the lotus).

The shorter portion of the pillar which is partly buried in the ground measures 1.52m in length bears four lines of Ashokan inscription in the Brahmi script which roughly translates as: "King Piyadasi Beloved of the gods, after 14 years of his coronation enlarged for the second time the stupa of Buddha kanaka Muni, and after 20 years of his coronat ion he came himself and worshipped and he caused this stone pillar to be erected."

SagarhawaAbout 12 km. north of Taulihawa, there is a forest area called Sagarhawa. In the midst of the forest there is a huge rectangular water pool which is popularly known as Lumbusagar, or a long pool. The ancient waterbody ruins, which were excavated and identified by Dr. Aslois A. Fuhrer in 1895 as the 'Palace of massacre of the Shakyas', can still be found on the west south banks of the Sagar.

DevdahaDevdaha is the ancient capital of the Koliya Kingdom, located 54 km east of Lumbini, across the Rohini River. It is the maternal hometown of Queen Mayadevi (mother), Prajapati Gautami (step-mother), Princess Yasodhara (consort), where Prince Siddhartha spent his early childhood. After seven years of his enlightenment, Lord Buddha had visited Devdaha and had ordained the followers of Jain Sadhu Nirgandha Nathputra. There are several other sites Kumarbarti, Khayardanda, Bairimai/Kanyamai, Bhabanipur/Devidamar, Mathagadi (ancient weapons), around Devdaha.

RamagramaIt is the brick mound on the bank of Jharahi River. It is seven meter high brick stupa consisting of relic (one of the eight astha dhatu) of Lord Buddha. The stupa was build by the King of Ramagrama, who was the eighth King to obtain the Buddha’s relics. History has noted that Emperor Asok to open it to multiply into eight four thousand stupa. However, the Dragon King of Ramagrama stupa did not permit.

Village TourThere are half a dozen routes that take you through typical villages of the area. These walks last from an hour to 3 hours.

A two hour drive westward to Jagdishpur Reservoir will be interesting for several water bird species. Jagdishpur is a Ramsar site as well as an IBA. Many bird species visit this man made reservoir during the winter time.