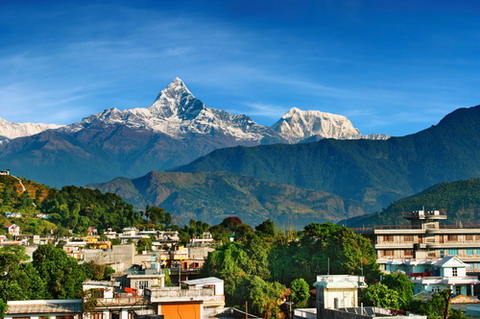 Sightseeing Around Pokhara ValleyPokhara is the most popular destination for visitors to Nepal. There is little in its past by way of neither history nor culture impact and the only important role that the old Pokhara played was that it was along the route of trade between India and Tibet. Today it is one of the fastest developing cities of Nepal, mainly due to tourism.The natural beauty of its lakeside location and its proximity to the mountains has made in the natural choice for trekkers and adventures. Pokhara is also the base for some of most famous trekking circuits of Nepal. By itself surrounding area provides ample scope for short walk and day trips, suitable for children or weary trekkers that can be made around the valley.Pokhara’s popularity has led it to accommodate people of many nationalities and there is no dearth of hotels, guesthouses and other lodgings, ranging from the deluxe to the super economy.Foreigners find the Pokhara an oasis where leisurely meals good books and shorts walk can easily fill several days- ideal if you are recovering from (or gearing up for) travel to India. It is the combination of the magnificent location, good-value accommodation and food, and the proximity of local village life that accounts for much of Pokhara’s appeal.
Sightseeing Around Pokhara Valley Visitors destination
Pokhara, the city itself offers quite a few places of interest for the casual and longer staying visitor. These are:-Phewa LakePhewa Lake is the center of all attraction in Pokhara. It is the largest and most enchanting of three lakes that add to the resplendence of Pokhara. Here, one can sail or row a hired boat across the water of the lake or visit the island temple in the middle of the lake, The eastern shore,  popularly know as Lakeside or Baidam, is the favorite haunt of all travelers restaurants, handicraft shops and other tourist facilities are located.Barahi TempleThe Barahi temple is the most important monument in Pokhara. Built almost in the Center of Fewa Lake, this two-storied pagoda is dedicated to the boar manifestation of Ajima, the protector deity representing the female force of Shakti.Devi’s FallLocally known as Patale Chango (Hell’s Falls) also know as Devins and Davids is a lovely Waterfall is about 2 km south West of Pokhara airport on the Siddhartha Highway. Legend has it that a trekker by the name of Davy, was washed away by the Padi Khola and mysteriously disappeared down into an underground passage beneath the fall.Mahendra CaveAnother of nature’s wonders in Pokhara is the Mahendra gufa. This large limestone cave is locally known a s the House of Bats an apt name for it. A two- hours walk to the north of Pokhara, it is best to bring our own torch to see the stalactites and stalagmites, as well as the local winged
residents.Seti Gandaki GorgeAnother of Pokhara natural wonders is the Seti Gandaki River. Flowing right through the city, the boisterous river runs underground at places. Amazingly, at certain places the river appears hardly two meters wide. However, its depth is quite beyond imagination, over 20m. Mahendra pul, a small bridge near the old mission hospital, provides a perfect view of the river’s dreadful rush and the deep gorge made by its powerful flow.The Old Bazar + Bindyabasini Temple Pokhara'straditional bazaar is colorful and so are its ethnically diverse traders. In its temples and monuments can be seen ties to the old Newar Architecture of the Kathmandu valley, Located about 4 k.m from Lakeside, the market S original charm is still evident. This area is strewn with shops selling commodities ranging from edibles to and cloth to cosmetics and gold, is a pleasant and shady spot to stroll around.The old Bazaar is also home to one of Pokhara’s most important shrines. Locally called the Bindhyabasini Mandir, this white dome- like structure dominates a spacious stone – paved courtyard built atop a shady hillock. It is dedicated to Goddess Bhgwati, yet another manifestation of Shakti. The park – like grounds offers a fine picnic area, and on Saturdays, and Tuesdays when devotees flock there to offer sacrifices, it takes on a festive flavor.World peace pagodaThis Pagoda is situated on the top of a hill on the southern shore of Fewa lake. It has four images of Buddha facing in four directions. The Pagoda is an impressive sight and its hilltop location commands a grand view. It is a great vantage point, which offers spectacular view of the Annapurna range and Pokhara city.Begnas Lake and Rupa LakeBegnas Lake is situated in the eastern part of Pokhara valley, at a distance of 15 km from Pokhara. Tourist can relax in the lodges and resorts situated alongside the lake. Yet another popular lake of Pokhara is the Rupa Lake. It is separated from Begnas Lake by a bridge known as Pachabhaiya. The lakes offer the prefect nature retreat because of their relative’s seclusion and opportunities for boating and fishing.Mountain Views:Clearly, the most stunning of Pokhara’s sights is the spectacular panorama of the Anapurna range that forms its backdrop. Stretching from east to west, the Annapurna massif includes Annapurna I to IV and Annapurna South. Although the highest among them is Annapurna I at 8091 meters, it is Machhapuchhre, which dominates all others in this neighborhood. Standing tall, proud, and dominating the skyline, Machhapuchhre, the fishtailed pinnacle is the classic snow – capped, needle – pointed mountain.
(Note: All of sightseen services will be serve from  Local tour guide Tulasi Ram Paudel)